I can picture turning the pages, looking at the illustrations and struggling to read the text. One of my early memories is of the Florence Nightingale Ladybird book in my grandparents’ house. I particularly remember this pink dress:

Florence’s birthday was the day before mine, which somehow in my little mind signified a deep connection between us. She was a woman who made a lasting impression on me, defying convention and perceived wisdom to revolutionise healthcare. As this page puts it

Because of her life’s work, sick people are today properly cared for in thousands of hospitals and nursing homes.

Florence had nursed her great-aunt until she died and then studied all she could about healthcare. She realised that treatments such as blood letting, opiates, mercury and arsenic, although popular with medics, were actually causing more harm than good.  She set about proving that you could help patients more by keeping them warm, clean, rested and well-fed.

Of course she is best known for her work in Crimean War hospital camps as “The Lady with the Lamp”. 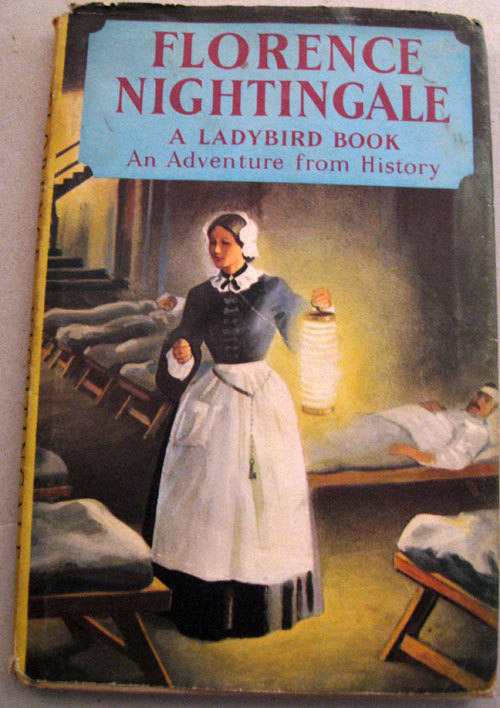 What is less well known about Florence Nightingale is that, after catching a fever in the Crimean War, she suffered with debilitating chronic illness, fitting a modern diagnosis of Myalgic Encephalomyelitis (sometimes badly named CFS). Much of her later work in reforming healthcare was done from bed. Government officials came to her home and she wrote many bedridden letters advancing nursing practice.

“In 1854, from the age thirty-five to sixty-years, Florence Nightingale was reported as suffering from chest pains, headaches, rapid muscle fatigue, persistent upper back pain, and being unable to concentrate if more than one person was present.”  Roberto Patarca-Montero

Florence Nightingale was keen on statistics. She is said to have invented the pie chart, although it seems more accurate to say she adapted the Rose Diagram or Wedges (which is similar). 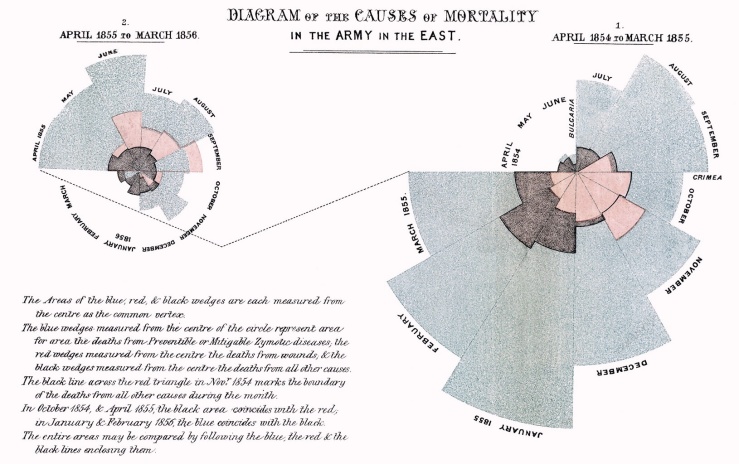 Florence Nightingale faced a lot of opposition from the medical establishment and this style of diagram was useful to convey her message: deaths from epidemic disease are avoidable and the Chief Medical Officer is wrong. Her diagram forms part of a call for greater spending on sanitation.

I wonder what Florence Nightingale would make of the current state of medical care for people with ME? What would she make of continued clinical guidelines for graded exercise therapy (GET) in the face of diagrams like this:

I can’t help but think that a 2017 Florence Nightingale would be passionately supporting the MillionsMissing demonstrations today. In answer to my speculation ‘What Would Florence Do?’, I think she would be blogging about the inappropriate NICE clinical guidelines which are up for review, writing emails to MPs and joining Alem Matthees, Tom Kindlon, Simon McGrath and researchers in picking through dubious statistical analysis in the controversial PACE trial.

Our UK protest demands today are:

On behalf of patients and their families, and in honour of those who have already lost their lives to ME, we respectfully call for:

-An increase in research funding, commensurate with the level of disability the disease presents in an estimated 250,000 British citizens.

-Immediate and complete withdrawal of Graded Exercise Therapy as a primary intervention as listed in the NICE guidelines, given the innumerable reports of its harmful effects and lack of substantiated evidence of its efficacy, and the legitimacy of the worldwide debunked, flawed PACE Trial.

You can contribute too by:

I am one of the #MillionsMissing from normal life due to Myalgic Encephalomyelitis. I’ve had ME for half of my life, almost my entire adult life. My experience has been of fluctuating limitations but for the last 5 years I have been mostly housebound.

I am doing what I can to campaign for people with ME and other chronic illness disability, but it is very hard to get much done due to the nature of the condition. We desperately need advocacy support from well allies. Join us!

If you found this interesting you may well like:

The fairytale about a princess who has ME

My experience of paralysis before last year’s MillionsMissing

Raising awareness of POTS comorbidity with ME

Highlighting the major issue of ‘minor ailments’ when you have ME

A post explaining the problem of uncertainty in chronic illness

A deep one, Unknowing-Knowing about Epistemological Crisis and ME

MEA Illness Management Report on CBT, GET and Pacing calls for major changes to therapies offered for ME/CFS | 29 May 2015

The PACE trial: Where “recovery” doesn’t mean getting your health back

2 thoughts on “What Would Florence Do?”

What do you think? Cancel reply

I aim to only include creative commons graphics on the site. Most images are from www.thegraphicsfairy.com. The origin of the image is usually in the file's name if you download.